Looking at the absurd in the everyday life. Reminders for a good life.

Oh the irony [01]I’m not sure the picture is ironic, but if Alanis Morissette – funny video – doesn’t have to care, me neither. Seems pretty confusing to say the least. that a usefull message about reliability can seem not that reliable when investigated closer but can remain usefull nonetheless.

Saw this in my facebookfeed. (original message here) 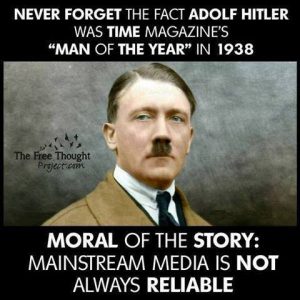 Message that “mainstream media is not always reliable” seems pretty legit. Everybody brings news from their perspective.

But then I wondered. Is Time magazine, or this nomination a good example of not being reliable? Time magazine seemed like a big name not to have a piece on (mis?)information like this. So I looked it up.

But then, I read the objective of the nomination: “Editors are asked to choose the person or thing that had the greatest impact on the news, for good or ill — guidelines that leave them no choice but to select a newsworthy — not necessarily praiseworthy — cover subject.”

Given this objective I think that the message of the picture is still valid, but the example given is not. I can understand why editors would pick Adolf hitler as having a great impact on the news – being newsworthy – not praiseworthy necessarily. I can understand we can discuss this, but I also think we can understand people that value this a valid nomination.

That makes this whole picture pretty confusing, absurd and funny to me. Because I can’t say the message is bullshit. I really do think we should question mainstream media. But we should do that with almost everything (from time to time ’cause “all the time” simply is impossible I know, really timeconsuming and exhausting, yet very valuable at the same time). On the other hand I don’t think this nomination of Hitler as man of the year by Time magazine stands as a good example of unreliability of mainstream media.

Got other examples of mixed messages, absurd contradiction? Any thoughts? Please comment, I’m interested in hearing other opinions. Thanks for reading.

on facebook to make sure you don't miss anything new.